Why I Am Not a Scientist: Anthropology and Modern Knowledge
by Jonathan Marks, A&S ’75
(University of California Press) 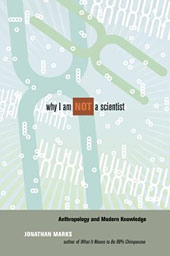 Marks admits in the preface that the title is hyperbole, then lays out a history of science showing it to be ever culturally influenced even as its propagators claim absolute truth–in short, each generation’s super scientists tend to debunk predecessors. The University of North Carolina professor of anthropology lays out an evolution through the Enlightenment, creationism, colonialism, eugenics, and pseudo-Darwinism, often commingled with racism and fraud. His ultimate targets are fellow scientists who, as authorities in their fields, make scientifically unsustainable assertions in matters beyond their ken. The consequences that most concern him come when the topic is race, which is never laid to rest. “Race is not a fact of human biology but of nature/culture,” he writes, “and no amount of genetic data and statistical analysis is going to resolve it.” 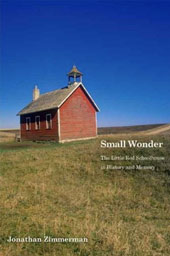 A paean to Americans’ primordial lust to educate their offspring, the image in the title has been a cliche for politicians since the first frontier, and still thrives in electronic words and pictures. In 233 pages, Zimmerman traces the ups and downs of that all-enduring one roomer with a bell cupola– or is it a pubescent steeple?–in the grasp of its defenders and exploiters. They are not only rural but urban, liberal and conservative, renowned and anon. Among the ironies: They rarely ever were red. But read? Oh, yes. “We all tailor the past to serve the present,” says the author. The book is part of an Icons of America series edited by New York University professor of media studies (and former Johns Hopkins faculty member) Mark Crispin Miller, A&S ’73 (MA), ’77 (PhD).