Matters of Intent
The Roman philosopher Seneca said that the true gift in giving is not found in a gift but in the giver’s intention. At Johns Hopkins, there are nearly as many reasons for giving as there are donors (83,396 of them last year, to be exact, including 20,040 alumni). This month, we delve into some of those donors’ intentions–a young alum saying “thanks” on behalf of her entire class; a couple with deep roots at the School of Medicine taking a stand to ensure that the school and hospital work in tandem to advance research, teaching, and patient care; and a retired businessman wanting to share with today’s students the same tools that brought him success. 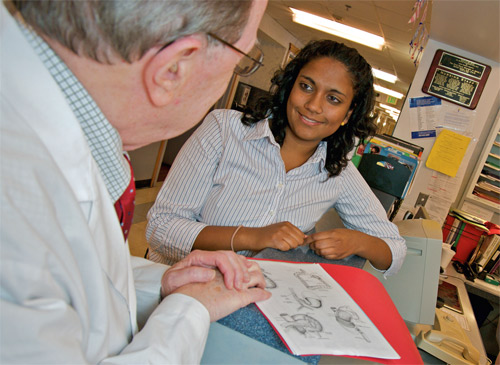 As co-chair of the Senior Class Gift, Nirosha Mahendraratnam helped the Class of 2009 raise almost $20,000 to support the Hopkins Fund, Blue Jays Unlimited, and other departments, programs, and student groups.

Like most college seniors, Nirosha Mahendraratnam, A&S ’09, spent her last year at Homewood thinking about the future. But she wasn’t pondering her next step. Grad school at Penn State was already in the bag. Instead, as co-chair of the Senior Class Gift, she focused on what her class could do for the next generation of Blue Jays.

She wanted to rally her classmates to say thanks for all they’d received during their undergrad years–scholarships and grants; opportunities with sports teams, dance troupes, and other student programs; and campus activities.

“There are a lot of us who wouldn’t be able to come to Johns Hopkins without scholarships,” says Mahendraratnam, who, as a public health major in the Zanvyl Krieger School of Arts and Sciences, was supported by the Miller Scholarship Fund and the LeRoy and Helen Sheats Fund. She also conducted research at Johns Hopkins Hospital as a senior with a grant from the American Gastroenterological Association.

Almost half of the Class of 2009 made a gift–many writing checks for the symbolic $20.09–to support the Hopkins Fund, Blue Jays Unlimited, and other departments, programs, or student groups. They raised nearly $20,000, including a matching challenge gift from Paula P. Burger, dean of undergraduate education at Homewood.

“Johns Hopkins is going to be with me, and every graduate, for the rest of our lives,” adds Mahendraratnam, who is now pursuing graduate work in health policy. “We need to ensure that Johns Hopkins continues to be the best.”