As the nation’s nonprofits feel the pinch of the current economy, a Johns Hopkins researcher says the “resilient sector” will adapt and survive. In fact, it may even thrive.

It’s tough to log on to the Internet or pick up a newspaper (if you can still find one) these days without being deluged with tales of businesses fallen on hard times. But while the private sector has made headlines, less is heard about another branch of American society— the approximately 1.3 million 501(c)(3) and 501(c)(4) organizations and religious groups that work for a purpose, not a profit. 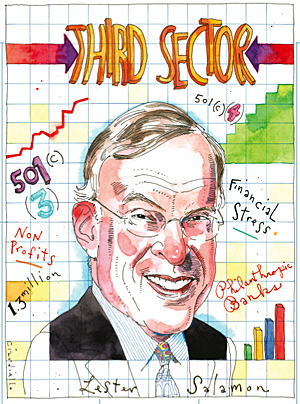 A lot rides on the survival of nonprofit organizations. According to the most recent figures, U.S. nonprofits employ 11.1 million paid workers, or 8.3 percent of the nation’s workforce, says Lester Salamon, founding director of the Center for Civil Society Studies at the Johns Hopkins Institute for Policy Studies. The nonprofit sector includes church and labor groups, professional institutions and social clubs, most of the country’s premier hospitals and universities, operas and theaters, advocacy groups, and countless family and children’s service, neighborhood development, antipoverty, and community health organizations.

These organizations become all the more vital during hard times, but unfortunately, the economic meltdown has thrown this “third sector” into crisis. Nationwide, nonprofits are under considerable financial stress, according to a report the center released in June. Foundations, their endowments devastated by the tumbling markets, are laying off employees and cutting back giving. The American public is giving less. Corporate philanthropy and government contracts are down, too. Dozens of organizations have closed their doors, including institutions as large as International Aid, a Michigan-based nonprofit that once raised $45 million annually to improve health care in developing countries. Scores more have been hit hard. Many watched donations plummet following the revelation of Bernard Madoff’s Ponzi scheme.

“Demand for nonprofit services is skyrocketing,” says Tim Delaney, president and CEO of the National Council of Nonprofits. “This is the sector that has learned to do so much more for so much less for so many more for so long. But it’s like a rubber band: You can stretch and tug, but at a certain point it is going to snap.”