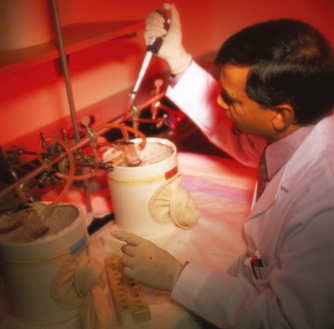 As a young PhD candidate in biochemistry in India, Nirbhay Kumar was felled by chills, sweats, and fever—the calling cards of malaria. He had been infected with Plasmodium vivax, a mild yet debilitating form of the disease. “I was very sick, but vivax doesn’t lead to cerebral malaria,” he says. “Maybe that’s why I’m still around.”

For the past 27 years, Kumar, a professor of molecular microbiology and immunology at the Bloomberg School of Public Health and a scientist at the Johns Hopkins Malaria Research Institute, has focused his research on making a vaccine that would use human antibodies to fight Plasmodium falciparum, the parasite that causes malaria. His work has centered on gametocytes, Plasmodium in its sexual stage. The parasites breed in the mosquito’s gut, and then break into the insect’s bloodstream, where they grow into infectious cells called sporozoites. These cells eventually settle in the mosquito’s salivary glands and are transmitted to humans when the mosquito feeds on their blood. In an infected human, the immune system kicks in after about 10 days, but its response is not strong enough to be effective, especially in someone who hasn’t developed immunity from previous bouts with the disease. Once infected, humans become a vector for the disease. Previously uninfected mosquitoes that take blood from infected humans become malaria carriers themselves, and the transmission process starts all over again.

Kumar has worked to create a vaccine that uses the human immune system to stop the parasite’s breeding in the mosquito’s gut, and to interrupt the gametocyte- to-sporozoite transformation. “We’re looking at, one, what chemical or molecular processes help create the gametocytes, and two, how to block their sexual congress in the mosquito’s gut, so we can stop the cycle,” Kumar says.

His lab has re-created the methods by which bacteria in the mosquito’s gut affect the development of gametocytes. He reordered the sequence of the parasite’s DNA to get the bacteria to make large amounts of a protein that starts up the parasite’s sexual function. That bacteria, used in a vaccine, would cause an inoculated person to create an antibody that would block the parasite’s reproduction. In other words, the human immune system—usually of little use against the worst forms of malaria—would get the kick it needs to beat the disease. If it works, the approach could outperform drug therapies. “Unlike drugs, the transmission-blocking immune system effect won’t encourage the parasite to mutate,” Kumar says.

Tests on other mammals, including baboons in Kenya, show a malaria transmission reduction rate of 98 percent. PATH, an international agency that encourages the development of anti-malaria vaccines, supports Kumar’s serum, lending it some legitimacy that would likely encourage its use once it passes clinical trials, Kumar says. “We should be able to submit an investigational new drug application to the Food and Drug Administration for early-phase clinical trials in three or four years, I’m hoping,” he says.

Kumar could hardly have taken on a more challenging project. An existing vaccine designed to block the infection has made a dent in the disease in Africa—but only that. Others who are trying to find a way to vaccinate people in sub-Saharan Africa have run up against logistical walls. How do you make it in the industrialized West, get it to Africa, and maintain its chemical viability? How do you make it cheaply enough to affect the health of millions of poor people? How do you reach those most vulnerable to the disease, many of whom live in the distant bush?

Kumar concedes that any vaccine will have to jump through several hoops before reaching its target. He remains hopeful that the concentration on the basic mechanisms behind malaria and its transmission will yield long-term results. He says his vaccine, if proven effective in humans, would have several additional advantages. It could be used in tandem with other vaccines to increase the effectiveness of both. It would slow down drug resistance by stalling the parasite’s reproductive cycle. And, no less impor tantly, it would lower the numbers of infected people, potentially wiping out malaria from affected villages and cities.

“I’ve always felt very hopeful we could control the disease,” he says. “Will we eradicate malaria in 20 years? I’m still conservative about that. But at least now we’ve developed the tools to understand it so that we can move the field in a more positive direction.”