The here, then gone, but soon-to-return nursing shortage
August 27, 2009 |  by Cassandra Willyard

Stephanie Madrzykowski didn’t plan on becoming a nurse. She worked in public health for a year and a half before realizing she wanted something that was more “hands-on medical.” When Madrzykowski enrolled in the Johns Hopkins School of Nursing in June 2008, it seemed like a sensible move. Just a few years ago, graduates could expect to attract several competing offers without expending much effort, says Sandra Angell, the school’s associate dean for student affairs. But soon after Madrzykowski started classes, the recession hit—hard. And nursing jobs, once plentiful, became scarce. 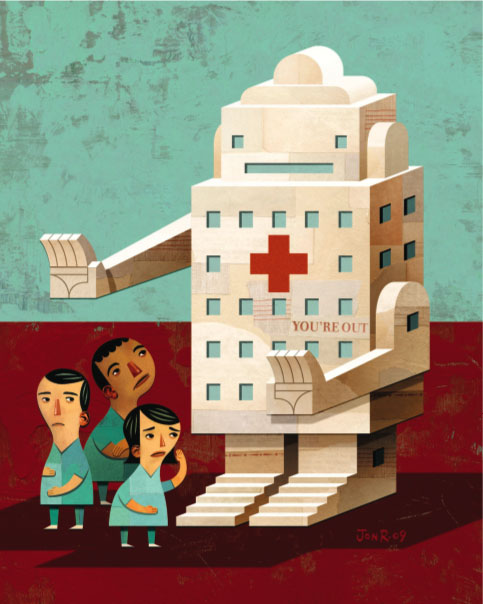 Nursing shortages have come and gone. The most recent one began in the late 1990s. Peter Buerhaus, a nursing professor at Vanderbilt University who studies changes in the nursing workforce, says the problem started on the supply side. Hospitals began running out of nurses to staff their operating rooms and intensive care units. Then the problem became one of demand. As the nation moved away from the health care cost-cutting measures adopted in the 1970s, hospitals began admitting more patients. Meanwhile, the population was aging, living longer, and developing more chronic diseases. Thus the need for nurses grew. By 2002, on average 13 percent of nursing positions at U.S. hospitals were unfilled. As a result, patient care suffered. When Buerhaus and colleagues conducted a nationwide survey in 2004, 78 percent of nurses and 61 percent of physicians reported that the nursing shortage had harmed the quality of patient care. According to Karen Haller, the hospital’s vice president of nursing and patient care services, Johns Hopkins had to close beds and hire extra nurses from temp agencies to maintain a safe nurse-to-patient ratio. In response, schools worked to produce more nurses. “Several years ago, when the nursing shortage was predicted to be pretty dire, we increased our enrollment,” Angell says. Other schools did the same.

Buerhaus found that in 2007 and 2008, hospital employment across the country grew by 243,000 nurses. “That’s a world record for employment increases,” he says. But the dramatic surge in employment did not mean 243,000 recent nursing school graduates found jobs. Buerhaus notes that more than half the new hires were older RNs—men and women who came out of retirement or from non-hospital nursing jobs to secure their family’s financial well-being. So paradoxically, in the midst of a nursing shortage, new graduates could not all land jobs.

The current market remains tight, but that should not be regarded as an indicator that the shortage has been averted. It’s only been postponed, experts say. “When we come out of the recession, I predict we’re going to see what we always see,” Haller says. “We’ll get more turnover and a higher vacancy rate.” Nurses who left retirement to earn extra money will slip back into retirement, and the former part-timers will go back to part time. Furthermore, the country’s nursing workforce—some 2.4 million strong—is aging. As of 2008, Buerhaus says, the average age of RNs was 43.8. And in just a couple of years, the oldest baby boomers, which make up a large chunk of the nursing workforce, will hit retirement age. Buerhaus estimates that by 2025 the country could see a deficit of 260,000 nurses. Some hospitals will feel the pinch sooner than others. Johns Hopkins will open two new clinical towers in 2011. “So we not only need every nurse we’ve got on board now,” Haller says, “we’re going to need others to run at full capacity.”

Though hospitals recognize that they will need today’s graduates to staff future openings, they do not have enough resources to hire them all now. Joan Diamond, a perinatal nurse manager at Johns Hopkins Hospital, split one full-time position into two part-time positions, one of which went to Madrzykowski, the Hopkins nursing student. “That gives them benefits, some money, and their foot in the door,” Haller says. “It was a very smart idea.” Hopkins Hospital has also allowed some recent graduates who can’t find jobs to continue working as nurses’ aides even after they have become licensed RNs. Nurses’ aides make significantly less than registered nurses, but a small paycheck plus benefits is better than unemployment.

If the future shortage is as large as Buerhaus predicts it will be, hospitals will need more than creative staffing tricks to fill the gap. They’ll need a vast supply of new nurses that can only come from increased enrollment. “The schools are the current bottleneck,” Haller says. “There are many qualified applicants that cannot get into nursing school right now. [Schools] don’t have enough faculty. They don’t have enough classroom space.” At Hopkins, both those issues are a concern. While many places have instituted hiring freezes, Hopkins is seeking new toplevel, doctorally prepared faculty in some areas, including global health, cardiovascular care, and healthy aging.

Another hurdle is finding enough RNs to oversee student training. Nursing students must spend a certain number of hours working with patients under the supervision of established nurses called clinical preceptors. But nurses are busy, and finding enough preceptors for all the students can be challenging. One way to address the problem, Angell says, would be to do more simulation. The School of Nursing has a new grant to test whether clinical simulation models might be able to reduce the amount of time students need to spend working with preceptors. The funding comes from a $15.5 million pool that is being divvied up among 17 Maryland nursing schools to create more openings for students throughout the state.

Madrzykowski remains upbeat. “I just feel really lucky to get my foot in the door,” she says. “Most of my friends who are graduating are having a really hard time finding work.”

Cassandra Willyard is a graduate of Zanvyl Kreiger School of Arts and Sciences (MA), 2007.