Vignette: The official chain of office
August 27, 2009 |  by Catherine Pierre 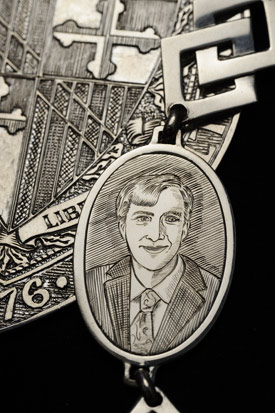 Later this month, when Johns Hopkins University installs Ronald J. Daniels as its 14th president, he will not have to look far for a reminder of his presidential lineage—it will be around his neck. Along with a home in Nichols House and an office in Garland Hall, the new president will receive the official chain of office, a ceremonial necklace, of sorts, fashioned from the engraved sterling silver portraits of every university president, starting with Daniel Coit Gilman. The chain, which the university president wears at events such as Freshman Convocation and Commencement, signifies the authority vested in the president by the board of trustees.

Each presidential portrait includes his dates of service, and the university seal completes the chain. First worn by Milton S. Eisenhower (president no. 8), the chain was fashioned in 1966 by a local silversmith, Henry Powell Hopkins Jr. (the family believes there’s a distant relation to the university’s founder). The university called on Henry to create the likenesses of Eisenhower’s successors as each one assumed the office. He’s now 92, so his son and daughter, Henry III (“Hoppy”) and Martha, run the family business, still located on Lovegrove Street in downtown Baltimore. Keeping with tradition, the university turned to them to create the newest link, and they commissioned artist Laurie Brown to do the engraving, based on one of Daniels’ more serious photographs to match the tone of the others. “He looks so youthful and energetic,” Hoppy says. “All the other guys are so stodgy.”

The updated chain will debut on the afternoon of Sunday, September 13, when Daniels is officially installed. The installation is part of a weekend-long celebration that includes a Saturday night dinner, two Sunday morning brunches, and a Sunday afternoon reception. In addition, the university’s academic divisions are planning events throughout September and October to welcome Daniels, including dinners, concerts, lectures, and a 2.5K run. Yes, the president will be one of the participants.

The installation ceremony is more than just academic pomp and circumstance. Typically the new president shares his vision for the university with the Johns Hopkins community. At press time, Daniels had not wanted to upstage himself by talking about it with Johns Hopkins Magazine, but look for our in-depth interview with him in the Winter issue.

After the ceremony, the chain of office will go back into storage, its work done until the next ceremonial occasion.