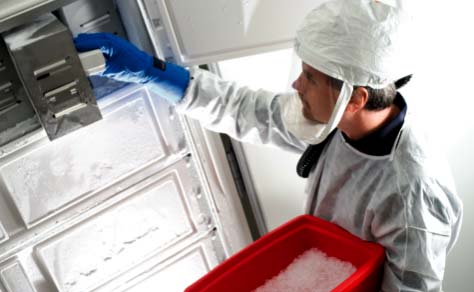 Virologists like Johns Hopkins' Andy Pekosz continue to work on a flu vaccine.

It had been clear to Dianne Whyne that something bad was happening in Mexico for several weeks. But on a Friday—April 24, to be exact—Whyne, who is director of operations for the Johns Hopkins Office of Critical Event Preparedness and Response (CEPAR), learned just how severe and potentially devastating the spread of influenza A strain H1N1 (the “swine flu”) really was.

Throughout most of the month, Mexico had issued health alerts about flu cases that were suspected to be H1N1. From its offices in Mount Washington, the staff of CEPAR—created by Johns Hopkins following the terrorist attacks of September 11, 2001, to serve as a central guiding office for Hopkins during massive emergencies— closely monitored the spread of the virus. On April 23, Mexico reported its first confirmed cases of H1N1 to the World Health Organization (WHO). The next day, Whyne and others learned from CEPAR director Gabor Kelen and executive director James Scheulen that the scattered cases of H1N1 reported across North America might signal a much more serious and widespread outbreak. Eight cases had been reported in the United States, and a phone call to Scheulen from a Hopkins emergency medicine physician convinced CEPAR’s experts that H1N1 had been spreading through many areas of Mexico and crossing into the United States without notice, treatment, or containment for an unknown period of time. (WHO would later report that it had been several weeks.)

This was unsettling news for two reasons. “It wasn’t avian flu,” says Whyne, referring to the strain for which CEPAR had been diligently preparing. “It was new virus. It [appeared to have] a high infectivity rate and a high mortality rate. And it was here in North America. Everyone— Johns Hopkins, the World Health Organization, you name it—had all assumed a new influenza would make its [first] appearance in Southeast Asia. Everyone assumed we’d have a couple of weeks to prepare. And here it was, on our front door.”

CEPAR’s team collated official statements with information from knowledgeable public health sources. The resulting picture was grimmer than previously acknowledged at the time. “There was concern in the reports coming from Mexico that the infection numbers seemed to be in the hundreds, if not the thousands,” Kelen recalls. The news was bad enough that Kelen and Scheulen instituted Hopkins’ Pandemic Influenza Preparedness, Response, and Recovery Plan, which put CEPAR in charge of making decisions and gathering information across the entire spectrum of Johns Hopkins institutions in the United States, from Homewood and Howard County General Hospital to Johns Hopkins Hospital and the Applied Physics Laboratory.

What happened in the next 10 days turned out to be a useful dress rehearsal for what most experts predict will be a more severe resurgence of the virus this fall. As it went into action, CEPAR’s first question was to determine the true severity of the threat. Kelen notes that Hopkins has triggers, such as infection levels, mortality rates, proximity to hot spots, and other metrics, for instituting various stages of response across the Hopkins system. H1N1’s potentially rapid spread (especially up the Interstate 95 corridor) and apparent virulence were among those triggers. But Kelen, Scheulen, and other Hopkins emergency medicine experts monitored developments and noticed indications that the problem might not be as alarming as it first appeared. For example, while the mortality rate in Mexico was high, it wasn’t as high as original reports had indicated. But “the real reason we became less worried,” says Kelen, “was that infections in the United States and other parts of the world did not appear any worse than seasonal flu and appeared to be even less virulent, with very few resultant deaths.” The feared influx of seriously ill and dying patients never materialized at Hopkins. “All of a sudden, within two days, it seemed manageable,” Kelen says. Hopkins began to ease off of its emergency footing.

On May 3, CEPAR staff began examining what had been learned during the response, an analysis sometimes known as a “hotwash.” There was a lot of good news, they say, particularly involving communication, a traditional Achilles’ heel in crises. But there were issues, too. Emergency personnel soon discovered they couldn’t quickly find basic information, such as who had reported to work on a given day. There was no centralized list of who, across all Hopkins institutions, had been fitted for the N-95 face masks that would be mandatory if the hospital experienced a surge of H1N1 cases, and the masks did not fit properly. There wasn’t a central list noting which personnel had received influenza A vaccines. And Kelen says that confirmation of suspected cases among Johns Hopkins university students was delayed due to backlogs of specimen processing at both state and Centers for Disease Control (CDC) labs, which made critical decisions more difficult.

Trish Perl, assistant professor in the Johns Hopkins Hospital Division of Infectious Diseases who works with CEPAR during major events, says, “I’m glad that we had a test run because I think we’ll do a lot better when it happens next time.” That’s “when,” not “if.” On June 11, the WHO raised the worldwide pandemic alert level to Phase 6—the most severe—and noted that more than 70 countries had H1N1 infections. By mid-July, the United States had more than 40,000 confirmed cases of H1N1, 23 deaths, and the highest concentration of new cases in the world. Assuming H1N1 follows the pattern of the past four global pandemics, it will spread and mutate over the summer and return in the autumn as a more dangerous virus. (Experts hope that an H1N1 vaccine in trials as of early August will be ready and plentiful by fall.)

Since mid-May, CEPAR has been working to create new protocols and procedures that it hopes will strengthen Hopkins’ response plans and provide a sound defense against what might be a very nasty second wave of H1N1. “The question is, ‘Will it be good enough?’” asks Perl. “My hope is that it will.”

Geoff Brown is a graduate of Zanvyl Kreiger School of Arts and Sciences, 1991.