Finding Her Grandfathers, Through Books
August 28, 2009 |  by Sarah Richardson

Both of my grandfathers were Army veterans of the Pacific theater in World War II. Unfortunately, that is all I know about their war experiences. My father’s father, William Richardson, would have been a black man drafted into a segregated army. He may have been a stevedore for the duration of the war; he may have joined one of the infantry units formed from the old Buffalo soldier regiments and been sent to Saipan to pacify the last Japanese soldiers there. He died before I was born; I have a single picture of him in uniform. My mother’s father, Charles Johnson, was a young white man who became a medic and served in Japan. My mother knows this because he came back to study medicine and become a doctor with the GI bill. He appreciated Japanese culture for the rest of his life. He died when I was quite young. 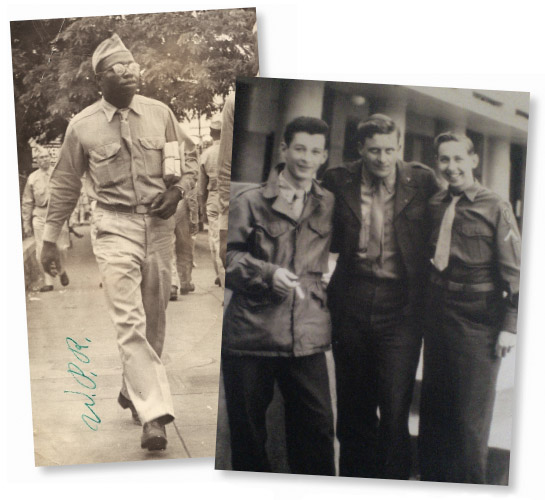 William Richardson and Charles Johnson (middle in photo): "I would come as close as I could to them through the words of their comrades," the author writes.

By the time I was interested in their likely disparate experiences, it was too late. But even had it not been, they might not have chosen to share those experiences with me. William Richardson wanted his only son, my father, to go to Vietnam because he believed a military experience was good for young men. My father was vehemently opposed to the war and resisted going, opening a wide and silent rift between them that was mirrored in many other American families. Whatever my grandfather did and felt in the Pacific, the division prevented him from sharing any details with his son. Charles Johnson wanted his five sons to go into the service before college, but he didn’t feel that his five daughters needed to concern themselves with either the military or higher education. Although my mother defied him and went to college, he never did share his army experiences with her. My grandfathers may never have shared their experiences with anyone—many veterans don’t.

I became interested in their stories in high school, but my parents could not supply any details. Apologetic, my father gave me The Good War, by Studs Terkel. It became the first book in my collection, a small paperback I read so often that I had to replace it twice. It was my first oral history, and I was completely engrossed by the personal touches in each story—by the slang, the humor, and the frank realities of the interview. Although I would responsibly supplement my readings with the measured discourse of historians like William Shirer and Rick Atkinson, I always preferred the sentimentality and varying temperament of primary sources. I think I was lucky to start with such an excellent book; Studs Terkel was an oral historian of superlative grace.

It struck me that, although my grandfathers had not passed their stories on, I could find men with similar experiences in these oral histories. If I could not hear the story from my grandfathers, I would come as close as I could to them through the words of their comrades. I began my collection of first person narratives of American wars. I especially sought compilations containing an interview with a black GI or a young medic stationed in Okinawa— soldiers whose experiences could possibly reflect my grandfathers’. I was truly lucky to discover The Invisible Soldier, an incredible compilation of interviews with black veterans of WWII, supplemented with extensive historical footnotes. I believe it to be the closest I will come to hearing or reading about my paternal grandfather’s experience at war. To bookend this apropos volume with a similar one for my maternal grandfather, I am looking for a copy of Patricia Sewell’s Healers in World War II, a volume of oral histories from medical corpsmen. I also hope to obtain Bruce Petty’s Saipan, a set of oral histories that concerns the Pacific theater.

I was interested in studying the African-American soldier in the armed forces in the 1940s because of the stark and often undiscussed difference between their experiences and the experiences of white soldiers. I was glad to find a third perspective of the World War II years in two excellent oral histories by John Tateishi and Stephen Fox (And Justice for All and The Unknown Internment) about the internment of Japanese and Italian Americans during World War II. The Fox book is of particular interest because few people are aware that there was any internment of non-Japanese Americans at all. Both books find Italian and Japanese veterans of the war who, like many black veterans, were finally able to express their deep ambivalence about fighting for a country that had wronged them, as well as their need to prove to the same country that they were patriotic and brave human beings.

My nascent collection needed books about Vietnam, and the first was Bloods, by Wallace Terry, an oral history of black veterans of that conflict. My father recommended it to me as a supplement to films like Hamburger Hill, Platoon, Apocalypse Now, and The Deer Hunter. As a young man, my father was quite convinced that he did not want to go to war, and he was frightened he would be sent anyway. He was not convinced that the military had become a friendlier place for black people in the 20 years since President Harry S. Truman issued Executive Order Number 9981 to integrate the armed forces, and he was certain that a war like Vietnam was not a good way to find out. The civil rights movement was coming about, and many black men my father’s age did not feel they had to fight a war to prove that they were worthy, as their fathers had done and were urging them to do again. Bloods tells the story of black men who did go to war against North Vietnam and who often found themselves in a simultaneous cold war with their American comrades. Reading it, I understood my father’s hesitation.

My collection would therefore grow in two directions—the much feted and well-regarded “good” war of my grandfathers, and the controversial and painful “bloody” war of my parents’ generation. I began to explore a major difference between my father and his father. One was desperate to resist the draft, and the other willing to go. I was lucky to find several oral histories of draft dodgers and conscientious objectors in Vietnam (Hell No We Won’t Go!, by Sherry Gershon Gottlieb, The Strength Not to Fight, by James W. Tollefson, and Days of Decision, by Gerald Gioglio). I could compare those to an excellent history of conscientious objectors during World War II (We Have Just Begun to Not Fight, edited by Heather T. Frazer and John O’Sullivan). Those objectors are often not acknowledged, though they made possible the similar efforts that would follow in the 1960s and 1970s.

I began this collection seeking to understand the contributions my grandfathers made to their country, but I have stumbled on to much more. I’ve become interested in comparing the language used by interviewees from different decades. The men and women of World War II use a different speech cadence, fewer expletives, and exhibit a reserve that tends to be absent from testimonies of veterans of later wars. I see this as an advantage of studying primary sources; the speech and vocabulary of oral histories offer many extra clues about society, undiluted by another historian’s interpretation. Oral histories may also be biased by the choices of the interviewer, or distorted by time and memory on the part of the interviewee. There may be cases where the stories are fabricated entirely; for example, there are two false stories in Al Santoli’s Everything We Had. Realizing this, I began to add other primary sources—usually letters and diaries—to round out my collection (Witness to a War, by Richard J. Aldrich; Dear America, edited by Bernard Edelman; and War Letters, by Andrew Carroll).

The change in language is a corollary of some of the greater changes in society that occurred between the two wars. Although my original intent was to contextualize the experiences of my grandfathers and my father, it soon became clear that I would be missing the whole story as long as I skipped the Korean War, which followed almost seamlessly out of World War II and made some Americans eager to enter Vietnam. The Korean War was the last war the army began with segregated units; the high casualty rate forced the issue by compelling commanders to accept African-American replacements for the holes in their ranks. I was quite pleased to obtain Donald Knox’s leviathan books on the subject (The Korean War: An Oral History: Pusan to Chosin and The Korean War: An Oral History: Uncertain Victory). These volumes are especially interesting because Knox interleaves the relevant snippets of oral histories chronologically through an exhaustively annotated historical narrative, rather than relating a single person’s entire story in separate chapters, as is usually done. It certainly helped me draw the final lines from my grandfathers’ service to my father’s time, and the changes in America and America’s military that may have made empathy so difficult between the two generations.

Reading through the first-person accounts of each conflict fills me with pride in all of my fathers, even though I have not heard their own personal stories. My grandfathers went to war separately, and probably not equally, and it changed everything for them. Although he may not have seen it that way, my paternal grandfather’s very presence was a salvo in the fight my father’s generation would carry on for equality under the law, because how can you discriminate against true patriots? The fact that his son was able to speak freely about the Vietnam War was a sign of his own victory. My mother’s father was able to experience a foreign culture up close, to develop an appreciation for the different, to jump from a farmer’s life into a doctor’s life—and to educate his children so well that one would, upon meeting a person of a different race for the first time, be able to see clearly enough to fall in love with him. I will never be able to talk to my grandfathers, but I have used my book collection and the words of the people who lived the conflicts of the 20th century to understand how they brought my generation here to the 21st century, with all of our ghosts as well as all of our gifts.

Sarah Richardson is a fifth-year graduate student in human genetics at the School of Medicine. This essay is adapted from her first place–winning entry in the Friends of the Johns Hopkins University Libraries’ 2009 Betty and Edgar Sweren Student Book Collecting Contest.