Advancing autism education, near and far
September 3, 2010 |  by Virginia Hughes 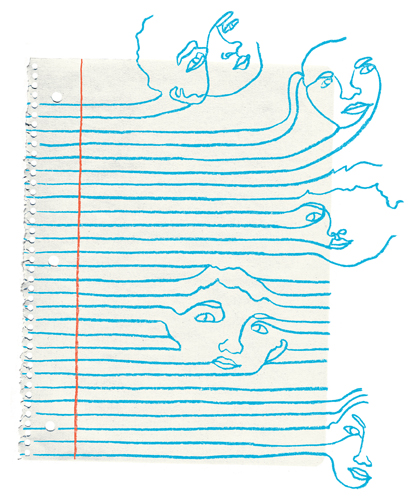 Any veteran special education teacher will tell you: There’s no way to predict how a student with autism will fare in the classroom. Jason could have an aversion to loud noises, making recess his daily hell. If Kate doesn’t eat lunch—a plain bologna sandwich and three Oreo cookies—at precisely noon, she could launch into a screaming fit. Christopher might be fairly even-tempered, with a rich vocabulary and mild obsession with the solar system, but he can’t sit through a lesson without flapping his hands. Autism—defined by the triad of social anxiety, communication impairments, and repetitive behaviors—is notoriously diverse, which is intimidating to teachers, according to Danielle Liso, assistant professor of special education at the School of Education. “You could put a dozen students in a lineup, all of whom have autism, and you wouldn’t necessarily know why they’re all standing in the same line,” she says. “It’s a huge challenge.” And a growing one: Today in the United States about one in 100 children are diagnosed with autism—up from one in 150 just three years ago.

Before advising parents and teachers on how best to teach these children to learn and communicate, Liso says, it’s imperative to raise awareness of what autism is—an incurable disease of early brain development—and to dispel myths about what causes it and how best to treat it. For instance, one popular and controversial hypothesis contends that autism stems from a gut problem. Many parents claim that a strict alternative diet, such as one lacking wheat or milk proteins, improves symptoms of the disorder. “Those things don’t have any empirical base,” Liso says. “Some families, understandably so, are trying to latch on to anything they think might help their child, when in fact it can be a detriment to their finances as well as to their child’s time.”

Instead, parents and teachers should focus on behavioral training that has been proved effective, especially if begun at an early age. Liso recommends “pivotal response training,” which is based on the idea that children with autism must learn a handful of “pivotal” skills before they can learn more complex behaviors.

For example, before a child can learn to have a conversation, she must learn how to get someone else’s attention. The best way to learn these pivotal skills is during natural interactions, such as in play time or as part of a daily routine, so that children have many opportunities to practice throughout the day. When a child carries out an appropriate behavior, the parent or teacher should immediately reinforce it with a positive comment, and make sure the child understands what the praise is for. “The key for families and teachers is to make it as naturalistic as possible, and move away from a strict drill-and-practice type methodology,” Liso says.

She has advice for teachers who continue this training in the classroom. One suggestion is simply to give children more opportunities for social interaction. For instance, instead of a teacher passing out materials, students could pass them to one another. Children might be assigned buddies to walk with in the hallway. During an art project, two children might have to share one glue stick. Another piece of advice is to take advantage of the particular interests of a child with autism. If Christopher is obsessed with outer space, then a teacher could incorporate stars and planets into the day’s math lesson.

To help incorporate training into a child’s everyday life, Liso is now turning to technology. She wants to develop videos and online resources that can reach any parent or any kind of autism teacher—whether an elementary school teacher or a speech or physical therapist—in any situation, from big-city school district to tiny rural community. “We would get a family started by providing some face-to-face training in the home, and then eventually taper that off and replace it with live interactions with a professor on the computer,” she says. “That puts more emphasis on the parents’ role.”

Liso has put autism awareness and behavioral training strategies into practice through an outreach program in South Africa, where there is little in the way of autism support or education. In some poor regions of the country, for instance, there’s no electricity or indoor plumbing, let alone modern medical services. In these communities, the older generations too often believe that autism is a curse, and curable with rituals or food concoctions. To combat this misinformation, Liso works with a nonprofit called Autism Action South Africa. On her first trip to Cape Town, in February 2009, she visited nearby schools and universities, in both rich

and poor communities, and families of children with autism, to teach people about the disorder. She answered questions from parents—My 3-year-old doesn’t talk, does that mean he has autism? How common are coordination and motor problems, like holding a pen?—on a live radio show. In August, Liso made a second outreach trip to the region.

Her efforts are part of a broader push by Johns Hopkins to provide focused programs that help teachers navigate the rocky course of the autism spectrum. In the fall of 2008, the School of Education launched a certificate program—five courses, conducted partly through online sessions and partly in person—to help special education teachers in rural areas of the state learn techniques for working with kids with autism. Similarly, this year the school began offering a master’s degree in severe disabilities with an emphasis in autism—one of the few autism-focused advanced degree programs in the country.